Standing On The Side Of The Road 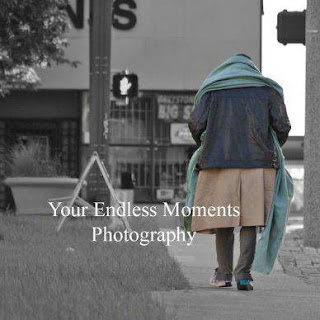 I am standing here on the side of the road -
Trying desperately not to be seen
It is the middle of your busy day
You do not notice me with your latte
Guarding against the cold wind-
Frozen inside outside walking here and there
No mansion or house to put my belongings, no one to care-
I am standing here on the side of the road-
Not the trash you just tossed away
That latte and uneaten muffin, my only meal today
Standing here, shivering in the city alone
No one to shelter and love me in the biting cold
You are busy, I know, but see me please
Life is not pleasurable or one of simple ease
I once had a home and a family too
Rushed through life, busy like you
Forgotten and discarded in the corner cafe
Wishing for more than your morning latte
My only hope, made it last all day
Trying hard not to be in anyone's way
Standing on the side of the road
It is where I live, where I grow old
Please remember when you rush by
That in my eyes are dreams as I cry-
There is more to me than what you see
If you are not careful, you can be me.

Laura Lee said…
You present so well the dichotomy of trying not to be seen and yet desperately wanting to be noticed. We are indeed just one false step from that woman's plight; it's the thought that crosses my mind whenever I encounter a homeless soul.
January 5, 2013 at 9:47 AM

Unknown said…
That's a nice work sister, the worst part is that if all billionaires could fill their empty mansions, wings and appartments , there wouldn't be something like homelessness, I like it.
January 11, 2013 at 12:00 AM

Popular posts from this blog

June 29, 2009
I am pleased to welcome Janet Riehl to my blog today. We sat down to chat, writer to writer, about her recent work and more about some of the feelings behind the work. I met Janet Grace Riehl through an open mic sponsored by the St. Louis Writers Guild. St. Louis is sort of a small town, and so our paths continued to cross as writers. Today I’m one of the hosts on Janet’s two-month internet tour. You can see the entire calendar for the tour on Janet’s site Riehlife: Village Wisdom for the 21st Century The previous post on this tour was an interview with Eden Maxwell Janet’s 2006 book Sightlines: A Poet’s Diary is now an audio book titled “Sightlines: A Family Love Story in Poetry and Music.” In addition to the 90 poems Janet reads from her book, these are interwoven with old-time music played in her father’s parlor, along with her father’s stories, and banter from the music session, giving us a complete context. Taye' Foster Bradshaw (Antona): How do you write? Tell m
1 comment
Read more
January 05, 2022
The air stills and you can feel it the shifting moves of when darkness decides to descend on a sunny day of possibilities because it is petrified of joy
Post a Comment
Read more

Tayé Foster Bradshaw
I have been writing for as long as I can remember. Writing is an expression of my purpose in life, my essence, my existence. Writing is my air, reading is my breath, musing is my wind.